I first heard it 19 years ago. And I heard it again a few weeks ago. And it was more amazing now, than then.

Yes, it was in Summer 2000 at the workshop in Morgantown, West Virginia where I first heard a full steel orchestra of Ellie Mannette’s steel pans. Over the years, this sound had slipped from the front of my memory.

But at his memorial concert in Morgantown this past July 12th,  for almost two hours , I sat enthralled, listening to the absolutely beautiful performance.

I can say without hesitation or apology, after listening to many, many steelbands in the last 20 years – from the best big steelbands at Trinidad Panorama, to the Trinidad National Steel Symphony Orchestra, to unique performances in NYC and elsewhere - nothing compares to hearing a full steelband with instruments made and tuned by Ellie Mannette and his staff at Mannette Instruments. The sound was angelic and mellow, not harsh. They did not even sound metallic. This is the essence of the Mannette touch!

So about the Memorial Service.

The main instructors at the annual summer workshop all paid their respects to Ellie by solo performances as well with a few compositions in his honor.

The show started with a unique "dodup" group playing some of the original instruments Ellie crafted, possibly 50 years earlier. The sound was reminiscent of what one likely heard on the street of Trinidad and Tobago in the 40s and 50s as shown in this vintage image. 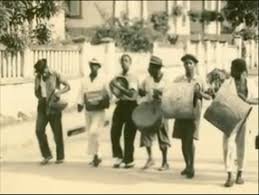 Here's the modern day dodup band at the Memorial.

The  arrangement of Jeff’s Buckley’s “Hallelujah” by Chanler Bailey, who spent the last 27 years working with Ellie, was a fitting opening piece, reflecting the loyalty, commitment and love we all feel for Ellie.

Chanler reminded us that for Ellie, good was relative. He wanted his work to be so good there was no other level of good beyond that.

Emily Lemmerman’s piece – and tribute was touching and sensitive. Victor Proust brought some island vibe from St. Thomas with a special inclusion of hammering in his piece. How one adds actual hammering to an orchestral performance with steel drums and not degenerate into a cacophony of sound is something only the sensitive hammering of Emily within Victor’s composition can achieve.

Duvone Stewart brought his winning Panorama skills  (and poetic talent) to bear in a scintillating rendition of David Rudder’s Man with the Hammer; and we all now know that he is as great a player as he is arranger.

His was the best of the evening with a true Trini flavor.

Andy Narell and Jeff Narell had to be there. We heard how their dad brought Ellie to New York City in the 60s and Ellie taught the boys to play in the Lower East Side. It is understandable they were both like sons to Ellie. Thankfully, we have much more of their best music to enjoy.

It would be amazing to hear the best panists in Trinidad, those who put their whole heart and soul into the music and you can see (and feel) them trembling with intensity, play a superbly arranged Kitchener tune (arranged by any of the top arrangers in Trinidad, take your pick) on these melodic Ellie Mannette pans. It will be a pore-raising experience for sure.

Coming almost 20 years since my last visit to Festival of Steel in Morgantown in 2000, this event was both a time to join with Ellie’s tribe; a family of panists from around the US, many of whom I meet online on FaceBook but had not seen in over a decade. Joseph Peck, and Tracy Thornton were two who I remember meeting n 2000 and have remained friends since that time. The sense of camaraderie, amidst the genuine missing of Ellie, was very real. Hopefully, with my FestivalofSteel in New York City in 2020, we can reconnect more often in the cultural and arts capital of the Big Apple and provide an authentic Caribbean experience in the city that never sleeps. FestivalofSteel.nyc

What was also so meaningful for me was to meet the young kids of some of the pan people I’ve known for years. The twins of Emily Lemmerman – ace pan tuner who worked with Ellie for years and now runs her Barracuda Steel Drums in Austin, were like angels when I met them the following morning. I’ve personally never met 3 year olds who sit quietly as they eat breakfast while in a strange hotel room.

Here's a photo of the World's cutest pan twins about to go to the pool! 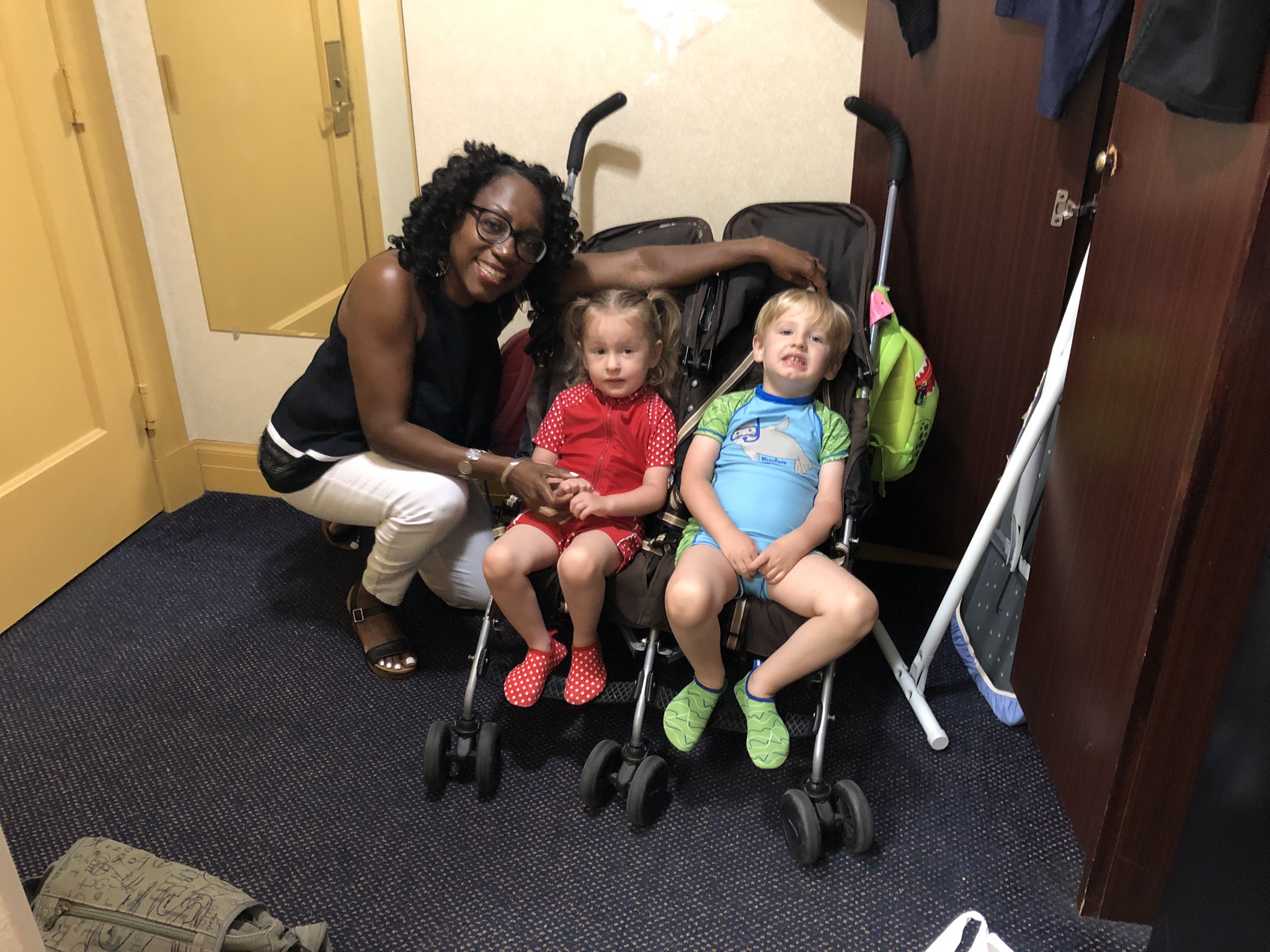 And then seeing Joe Peck’s young boys in person after all the Facebook posts and pics, was another great moment. I can see the next generation of steelpanists arising. And this is why I started developing the mobile games --- because these kids are all into the digital world and what better way to make the steelpan part of their lives than to have it living on the smartphones and ipads they use with such ease. I’m eager to launch the newest game at the end of September. This will build on the first 3 games which are already in the App store and on Google Play.

Of course, for me, it was also quite special to see many women in the audience wearing their Liz Mannette earrings, pendants or bracelets. I was able to meet a few and was overjoyed to hear them express how special the authentic steel pan pieces are to them. This is what makes the design of these jewelry gifts and accessories so meaningful. I know they satisfy the desire among the steel pan community to showcase their love for the instrument in a stylish classic way. Almost all the customers wore the Pan Hoops line, which is a favorite of the core steelpan community. And this is why I am expanding that line, adding some enameling and stones to the pendants and earrings (plus adding some cufflinks and tie tacks for men).

Here is a happy customer! 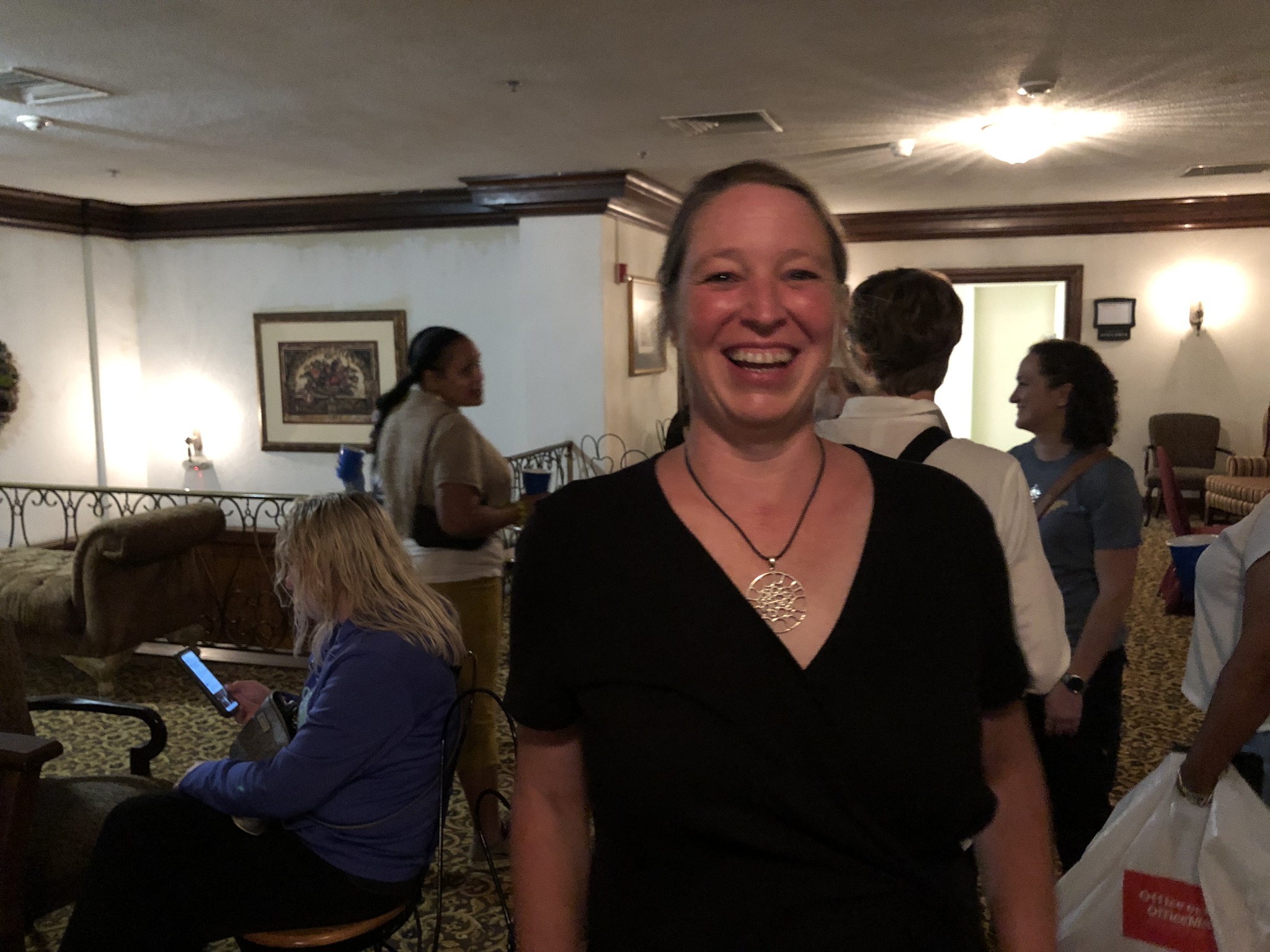 The memorial also allowed me to reconnect with other Mannette family members I had not seen for more than 20 years, but who, it turns out, live within walking distance of my home in New York City. So there is no excuse for us not hanging out now. Just being a Mannette and seeing the Mannette Instruments staff made me proud to recognize how Ellie was able to fulfill his passion to spread the steelpan to the world and then build a company to continue this work beyond him. This is part of the great Mannette legacy which I worked through in the memoir I recently completed. And, in my small way, I hope to continue this legacy by designing beautiful products and experiences for people around the world. 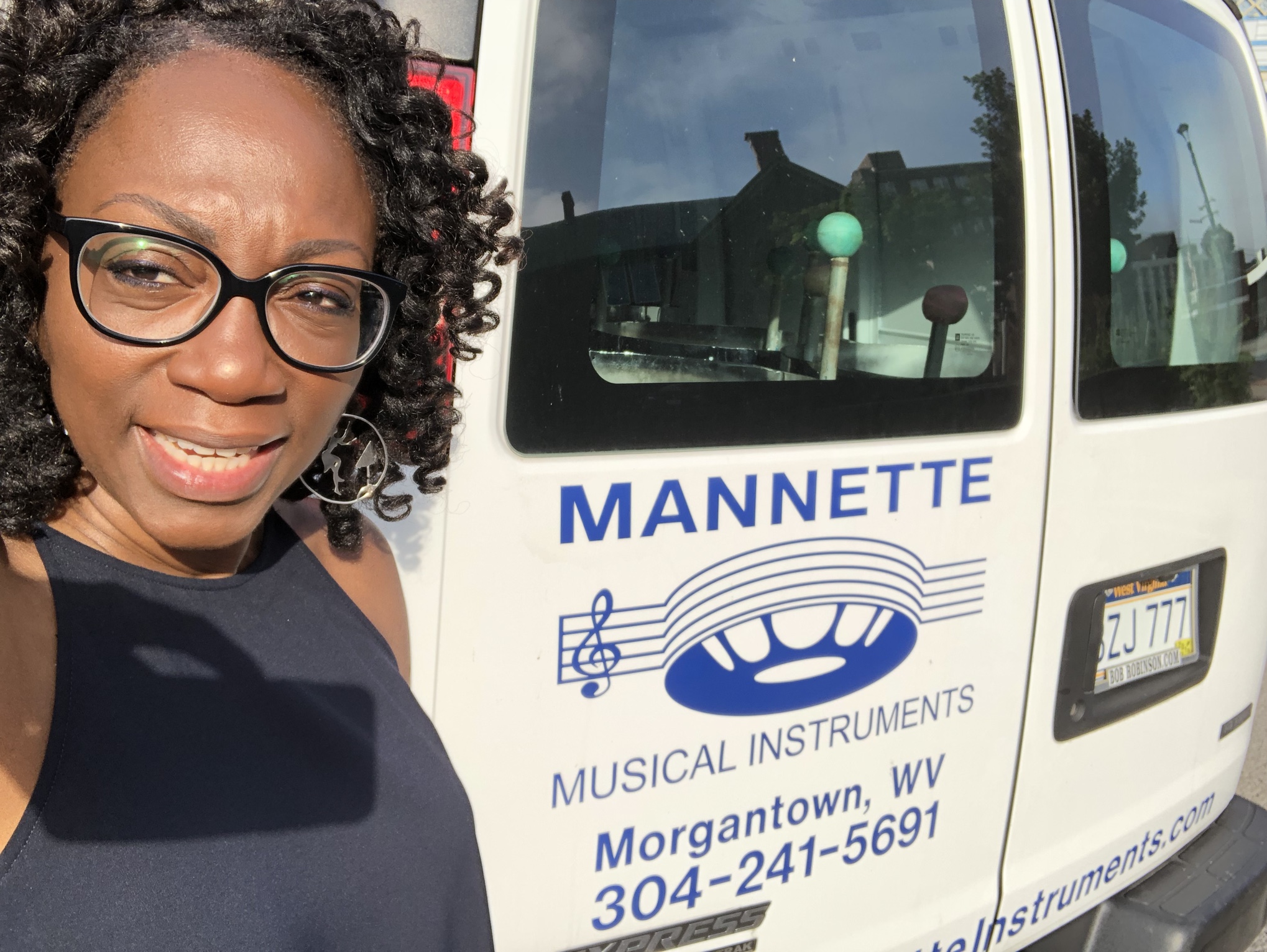 We cannot forget the contributions of Kaethe George, Ellie’s long time business partner who died a few year before Ellie in 2013. I reminisced about Kaethe at the Memorial because I know she was smiling down at us. I told the guys from Three Trinis Production company as much – when they unexpectedly asked to interview me for their upcoming documentary on Ellie. I wish I’d been more camera ready, but when you’re living your passion, you’re always camera ready. Just click and smile.